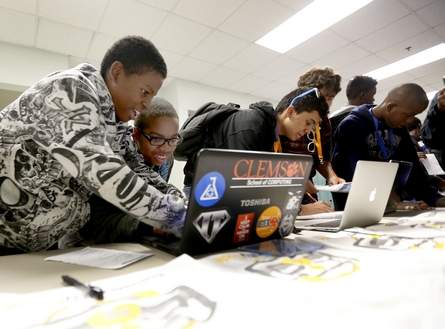 To get kids interested in complicated subjects like computer science, sometimes all they need is a taste of the real thing.

The second annual iteration of the program, accessible through code.org, made an appearance in nine local schools this week, which is Computer Science Education Week.

For the younger children, the tutorials are very simple, said Olga Reyes, a computer science instructor who led Hour of Code activities at St. Patrick.

The tutorials use popular characters like “Angry Birds” and Elsa and Anna from the movie “Frozen” and direct students to solve a problem by giving the computer simple commands, in English.

High school students played those games, too, but can also figure out some of the more difficult puzzles, said University of Florida computer science graduate student Elizabeth Matthews, who volunteered to help teach during Eastside High’s Hour of Code event.

For its first brush with the program, Eastside teamed up with professors in the UF Herbert Wertheim College of Engineering and CommunityCode to get 900 to 1,000 students — nearly all of Eastside’s students — through the hour-long introduction to coding.

Christina Gardner-McCune, Ph.D., helped bring the program into schools with Clemson University last year, so when she and her husband, Darryl McCune, chief information officer of CommunityCode, moved to Gainesville, the pair decided to reach out to Alachua County Public Schools.

The McCunes, along with some more UF graduate students and local tech companies, held a combination open house/demonstration for the general public after school ended to reach even more students.

Gardner-McCune said there are few opportunities for students to be exposed to computer science before they graduate from high school, so they may never know that they like it or know what jobs are out there.

“I think this event can help that,” she said.

At Eastside, any teacher who wanted to participate could bring their class to a computer lab for an hour-long coding activity.

A few dozen students who are enrolled in Eastside’s computer science classes had had experience with the concepts before, but most hadn’t.

Margaret Parker, a sophomore who did the Hour of Code during her Spanish class, had never seen computer code before but said she was having fun working through the Angry Birds activity.

“It’s fun and I think coding is an important skill in the digital age,” said Parker, 15.

Matthews, one of the 15 UF volunteers who abandoned finals-week studying for a day to spread the joy of code, said it’s especially important to expose girls to computer science early on, to encourage them to keep going with math even if they aren’t succeeding right away, she said.

Matthews said a lot of times, girls are told that it’s OK to not like math, that they can just stop.

As a pre-teen, she thought math was boring and not applicable to real life until a college professor did a demonstration with basic computer science logic in her middle school classroom.

Knowing there was interesting material on the horizon, Matthews said she was able to push through the boring stuff and now does research on the inner workings of video games.

“Just keep trying and maybe you’ll find that you love it,” she said.