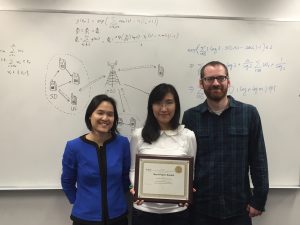 This work has both theoretical and practical contributions to the Device-to-device (D2D) communications research, which has recently emerged as a promising technology for boosting the capacity of cellular systems, and one of the new exciting features of 5G. Due to its mobility nature, one of the most critical problems in the D2D integration perhaps is to optimally and adaptively allocate the radio resources without re-computing it from scratch for each changes in the networks. Theoretically, this work has presented the first online algorithm, namely ODSRA, for dynamic resource allocation while maximizing spatial reuse. At the core of the resource allocation problem is the online set multicover problem, for which the first deterministic competitive online algorithm was introduced in this paper. Practically, ODSRA provides a new strategy to maximize the spatial reuse and network throughput in a stable and extremely fast fashion. This enables the stable transmission between the devices even when users may move around.

OptNetSci, led by CISE Faculty My T. Thai, conducts cutting-edge research on a broad range of topics centered on the optimization and its connection to network science, which is an interdisciplinary academic field, including communication networks, online social networks, smart-grids, and critical large-scale complex infrastructures. Its goal is to design optimization models, theories, and approximation algorithms for many fundamental problems arising in complex networks, helping transform the current best effort network to a more resilient and secured infrastructure of which network resources can be optimally exploited. One of its current projects is to design disaster resilient infrastructures.