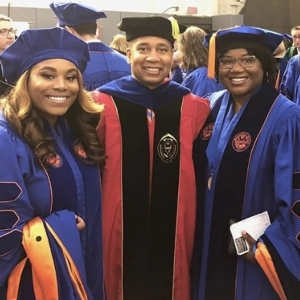 This May, the UF Department of Computer & Information Science & Engineering (CISE) celebrated a milestone of firsts as France L. Jackson, Ph.D., and Jessica N. Jones, Ph.D., became the first black women to graduate with Ph.D. degrees from the department.

These achievements are particularly significant in the field of computer science. While diversity in STEM is growing, there continues to be a large disparity in representation of race and gender. In the Diverse Issues in Higher Education article titled Report: Stark Gender, Racial Gaps Persist in Engineering, Computer Science, author Tiffany Pennamon quotes Juan E. Gilbert, Ph.D., The Banks Family Preeminence Endowed Professor and department chair.

“Building a sense of community along the pipeline so that women avoid feelings of isolation in the field… is an invaluable tool to help bridge – and eventually close – that gap,” Gilbert said.

Jones graduated with a Ph.D. degree in Human-Centered Computing. Her research centers on the impact of a culturally relevant and intelligent tutoring system on black second graders. She plans to work as a civilian researcher for the U.S. Navy after graduation.

Jackson also graduated with a Ph.D. degree in Human-Centered Computing. She began her full-time position with Intel this January, where she currently works as a user experience researcher. Her research is focused on socially acceptable wearable Brain-Computer Interface (BCI) technology, and she is working with a wearable company to see how the work can include other head-worn wearable devices.