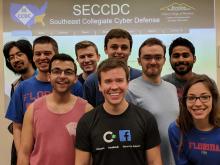 For the third time in three years, the University of Florida Student InfoSec Team (UF SIT) has been 1 of 7 teams whose high performance has qualified them to compete in the regional Southeast Collegiate Cyber Defense Competition (SECCDC). The competition – in which a group of students must defend a computer network from persistent attacks from hacking experts – will take place from April 2-3 in Kennesaw, Ga.

In February, 12 members represented UF in the remote competition: Shawn Newsome, Scott Miller, Vijay Prakash, Claire Seiler, Ben Simon, Terry Thibault, Anton Valdez, and John Woodman – along with alternating members and nonparticipating representatives Nicholas Barnes, Sydney Achinger, Daniel Chalco, and Madeline Farina. They participated in the 4-hour preliminary qualification competition. After achieving one of the highest scores, the team continued their unbroken qualifying streak and were invited to move to the next round – the onsite regional competition.

Joseph N. Wilson, Ph.D., an associate professor at UF’s Department of Computer & Information Science & Engineering, is the faculty advisor for the InfoSec Team.