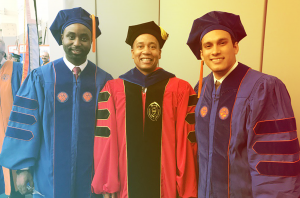 The University of Florida Department of Computer & Information Science & Engineering (CISE) is proud to announce the graduation of its first two students from the Human-Centered Computing (HCC) Ph.D. degree program.

“This is the beginning of something great,” said Juan Gilbert, The Banks Family Preeminence Endowed Professor and department chair. “I am extremely excited about our first two graduates. They are going into academic positions at major research universities to do great things. I am so proud of them and our program.”

Though HCC classes were taught prior to the start of the program, the opportunity to earn a Ph.D. degree in HCC officially became an option in Fall 2016. The idea of creating an HCC Ph.D. degree came to CISE in 2014 when the department hired Gilbert, who was one of several preeminent hires at the time. Gilbert, who was recruited from Clemson University, brought with him several students and faculty whose research primarily focuses on HCC.

“Through innovative research that connects people, technology and culture, the HCC Ph.D. program has the potential to make a significant impact on society,” Gilbert said. “Our HCC Ph.D. students are conducting research that addresses societal issues, such as teaching math to children, training doctors, and using brain-computer interfaces to monitor self-engagement during studying.”

The department’s HCC students have worked with companies such as Google, Intel, NASA and Harris Corp. Many of the department’s Ph.D. students receive funding, with the largest awards at four years of guaranteed.

Interested in learning more about our HCC Ph.D. program, visit our degree page.