Four students from the University of Florida Department of Computer & Information Science & Engineering (CISE) received an Outstanding International Student Award for their exemplary academic achievement and involvement at UF. The winners, Guangyu Zhu, Shikha Mehta, Mimonah Al Qathrady and Aishat Aloba, were among 15 students from the Herbert Wertheim College of Engineering to receive the award.

Zhu is an undergraduate student. She is the president of Women in Computer Science & Engineering (WiCSE), a student group at UF. She helps with all the WiCSE sub-programs, mentorship program, shadowing program, and USAB (Undergraduate Student Advisory Board) in operation.

Mehta is pursuing her master’s degree and focuses on backend software development. She is also a member of WiCSE, which has a mentorship program that pairs freshman with seniors. She has previously worked for Microsoft, UF and Udacity.

Qathrady is a Ph.D. student whose research focuses on mobile networks. She has been involved in N2Women, which is a community of researchers in the fields of networking and communications. She has also coordinated meetings for the Mobile Networking Laboratory at CISE. 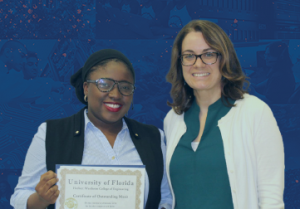 Aloba is a Ph.D. student and is currently working on the Wacom Project and the Kids Pose Project as part of the INIT Lab. Her interests include human-computer interaction, machine learning, technologies for children, and app development. She created Gator Women In CS, a Lean In Circle that is part of a network connecting women studying computer science and engineering at universities around the world.