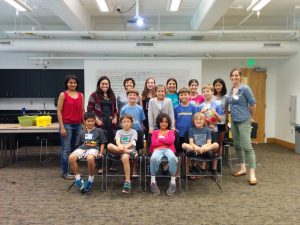 Animation is the art of creating the illusion of life. How young do you have to be to tell a story with this medium?

At the Stop Motion Animation camp, one of the Harn Museum’s summer camp offerings, Nicole Reno brings the art of animation to children as young as 7-12 years old. When she spoke about the camp to Eakta Jain, Ph.D., an assistant professor at CISE, Jain’s curiosity was piqued, “How does one explain the principles behind animation to young learners?”

In late June this summer, Jain helped introduce the students in the camp to the fundamental principles of animation defined by Disney master animators Frank Thomas and Ollie Johnston. The photograph shows Jain with the students and teachers. Students made their own short films in small groups, in addition to a collaborative film with the entire class called Misfits from Mars. Nicole Reno, lead teacher, commented that the students enjoyed the workshop, and designed their characters to have appeal, a principle they learned from Jain.

Jain’s previous engagement with the Harn Museum was an exhibit of her work at the 2014 Engineering in Art night.