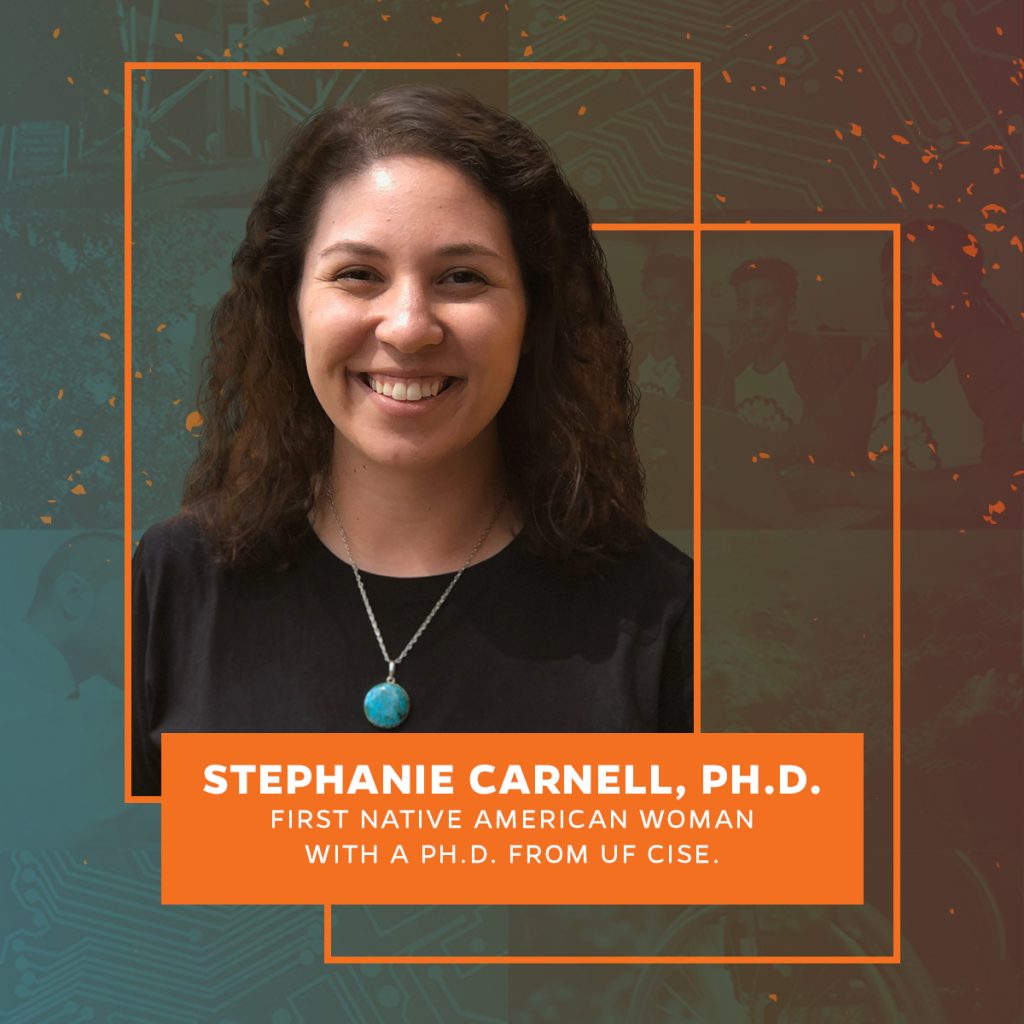 The University of Florida Department of Computer & Information Science & Engineering (CISE) is proud to announce the graduation of Stephanie Carnell, Ph.D., the first Native woman doctoral student in the department.

Dr. Carnell graduated this summer with a doctoral degree in Human-Centered Computing (HCC) and was a member of the Virtual Experience Research Group, which is directed by Benjamin Lok, Ph.D., a professor in CISE. Dr. Carnell’s research investigates how we can use virtual humans to help medical students improve their communication skills with patients. Her dissertation explored how medical and healthcare students communicate with virtual humans by studying their message production, or how they craft the questions they ask virtual humans.

In the future, Dr. Carnell hopes to contribute to society’s understanding of how people communicate, either with computers or with each other. During her time at UF, she was a founding member of the Society for Advancing Chicanos/Hispanics and Native Americans and of the American Indian Science and Engineering Society.

“I hoped that my (small) participation in both of these groups have helped in setting them up for long-term success,” she said. “I never had access to these types of groups in my undergraduate career, so being able to be a part of clubs like this is new and exciting.”

Dr. Carnell said she thinks these groups are great for promoting wider representation in the sciences and for building interdisciplinary networks and support systems. She gave credit for the creation of these groups at UF to Alex Hernandez, a Ph.D. candidate in the Whitney Lab; Brendan David-John, a CISE Ph.D. student; and Mikaela David-John, a master’s student at the UF Institute of Food and Agricultural Sciences.

Dr. Carnell said her tribe is the Adai Caddo, which is a state-recognized tribe in Louisiana, and she is a member through her maternal grandfather, Julius.

Dr. Carnell received her master’s degree in computer science from UF and her bachelor’s degree in physics from Samford University. When she applied to graduate school at UF for a degree in computer science, Dr. Carnell said she knew she wanted to do something interdisciplinary. Her undergraduate studies had been a mix of the humanities, social sciences and sciences, and she was interested in pursuing a similar mix of research.

“My original plan to pursue that mix at UF was to create my own interdisciplinary research while pursuing a Ph.D. in Computer Engineering,” she said. “But when the HCC Ph.D. program was added, I decided to switch immediately.”

Though HCC classes were taught prior to the start of the program, the opportunity to earn a Ph.D. degree in HCC officially became an option in Fall 2016. The department’s HCC students have worked with companies such as Google, Intel, NASA and L3Harris.

Interested in learning more about our HCC Ph.D. program? Visit our degree page.