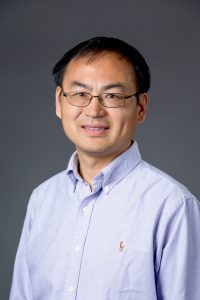 After graduation, he worked with Cisco Systems for three years before joining UF in 2002. He has published more than 180 peer-reviewed journal/conference papers. He received IEEE Communications Society Best Tutorial Paper Award and NSF CAREER Award. He holds 12 U.S. patents. He served as an associate editor for IEEE/ACM Transactions on Networking and a number of other journals. He is a Fellow of IEEE and a Distinguished Scientist of ACM.