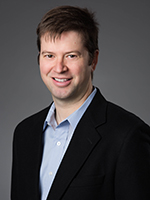 A CAREER award is the National Science Foundation’s most prestigious award for junior faculty and is designed to help provide a foundation for a lifetime of scientific leadership.

The interface between people and technology has come a long way since the robot on the original Lost in Space television series (circa 1965-1968) slowly and mechanically uttered, “DANGER, . . . Will . . . Robinson!” These days Alexa and Siri almost sound like a family member in the next room that we just can’t see.

Jamie Ruiz, Ph.D., an assistant professor at the UF Herbert Wertheim College of Engineering’s Department of Computer & Information Science & Engineering (CISE), received his CAREER award from NSF to support his research into “Next Generation Multimodal Interfaces.” Ruiz is working to understand how nonverbal communication, such as a person’s gaze, posture and facial expressions can be interpreted by computers in order to provide a more natural interaction between humans and technology. Such interaction will become more and more important as humans continually increased their technology involvement each year.

Ruiz will use his award to first study human-human nonverbal communication to determine common characteristics. From data collection on human-human interactions, the research will move to creating the ability for computers to recognize the input and understand the meaning of a gesture or a look. Ruiz hopes to develop mathematical models that will allow designers and researchers to predict the costs of any proposed interaction techniques in terms of the machine learning involved.