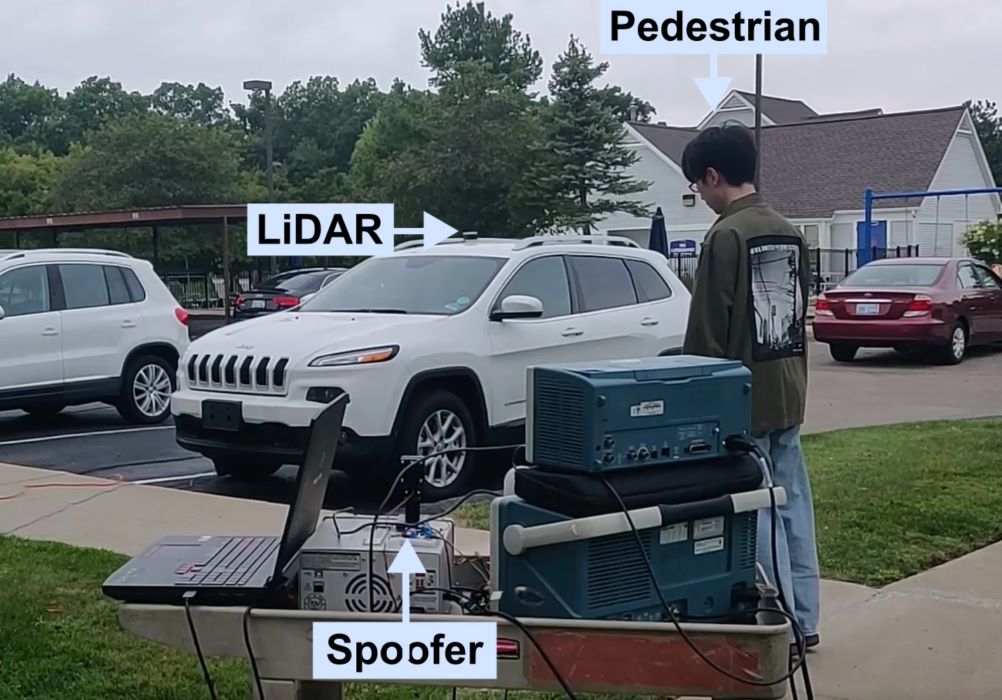 Self-driving cars, like the human drivers that preceded them, need to see what’s around them to avoid obstacles and drive safely.

The most sophisticated autonomous vehicles typically use lidar, a spinning radar-type device that acts as the eyes of the car. Lidar provides constant information about the distance to objects so the car can decide what actions are safe to take.

But these eyes, it turns out, can be tricked.

New research reveals that expertly timed lasers shined at an approaching lidar system can create a blind spot in front of the vehicle large enough to completely hide moving pedestrians and other obstacles. The deleted data causes the cars to think the road is safe to continue moving along, endangering whatever may be in the attack’s blind spot.

This is the first time that lidar sensors have been tricked into deleting data about obstacles.

The findings will be presented at the 2023 USENIX Security Symposium and are publicly available online.

Lidar works by emitting laser light and capturing the reflections to calculate distances, much like how a bat’s echolocation uses sound echoes. The attack creates fake reflections to scramble the sensor.

“We mimic the lidar reflections with our laser to make the sensor discount other reflections that are coming in from genuine obstacles,” said Sara Rampazzi, a UF professor of computer and information science and engineering who led the study. “The lidar is still receiving genuine data from the obstacle, but the data are automatically discarded because our fake reflections are the only ones perceived by the sensor.”

The scientists demonstrated the attack on moving vehicles and robots with the attacker placed about 15 feet away on the side of the road. But in theory, it could be accomplished from farther away with upgraded equipment. The tech required is all fairly basic, but the laser must be perfectly timed to the lidar sensor and moving vehicles must be carefully tracked to keep the laser pointing in the right direction.

“It’s primarily a matter of synchronization of the laser with the lidar device. The information you need is usually publicly available from the manufacturer,” said S. Hrushikesh Bhupathiraj, a UF doctoral student in Rampazzi’s lab and one of the lead authors of the study.

Using this technique, the scientists were able to delete data for static obstacles and moving pedestrians. They also demonstrated with real-world experiments that the attack could follow a slow-moving vehicle using basic camera tracking equipment. In simulations of autonomous vehicle decision-making, this deletion of data caused a car to continue accelerating toward a pedestrian it could no longer see instead of stopping as it should.

Updates to the lidar sensors or the software that interprets the raw data could address this vulnerability. For example, manufacturers could teach the software to look for the telltale signatures of the spoofed reflections added by the laser attack.

“Revealing this liability allows us to build a more reliable system,” said Yulong Cao, a Michigan doctoral student and primary author of the study. “In our paper, we demonstrate that previous defense strategies aren’t enough, and we propose modifications that should address this weakness.”