Abstract: The recent resurgence of VR is exciting and encouraging because the technology is at a point that it soon will be available to a very large audience of industry sectors and consumer markets. Yet, it has also been a little bit disappointing to see that VR technology is mostly being portrayed in the public eye as the ultimate gaming environment. But, VR is much more than that; for over twenty years virtual reality has been pushing the edge of innovation in engineering, design, training, and many other areas proving itself as a valuable tool to improve, accelerate, and advance processes and product-to-market operations. Furthermore, VR is also much more than goggles; we need to understand what, how, and where users need VR to then select the appropriate VR platform to deliver the applications. For example, during a product design cycle, team reviews and discussions are necessary, so team-enabling virtual reality platforms like large immersive rooms or walls are more effective platforms as the team can simultaneously share the immersive review experience while maintaining the social interactions of a face-to-face meeting. For VR to become the true new innovation engine, the current market (both consumers as well as technology providers) we need to understand that VR has been pushing the edge of innovation for over twenty years and that many of those advances somehow seem lost in today’s frenzy to bring to market “new and innovative” applications. We need to be aware of the challenges in aspects related to creating engaging, effective, and safe VR applications as well as the challenge to differentiate VR professionals from VR amateurs.This talk will first present a wide perspective of what VR does as an innovation engine, the options we have today to explore virtual spaces to achieve innovation in different industry sectors, and its potential benefits and limitations when it is integrated in a variety of workflows. The speaker will discuss her over 25 years of experiences on developing VR solutions for specific industries that have been critical to accelerate VR technology development and deployment as well as to quickly determine technology development paths that, although exciting or “cool”, may not yield successful practical outcomes. The talk will follow with a discussion of the speaker’s newest work on bringing social VR systems, those that a single platform allows for multiple users, to the consumer market. These types of platforms used to be complex, expensive, and customized systems. Her work is bringing multi-user VR platforms, like projection rooms and walls, to the ease of use and cost to meet the expectations of today’s VR market. She will discuss specific industry cases that she has led through collaborations with her research centers in which VR has proven its value to enhance productivity and efficiency. The talk will end providing a vision on the future of VR applicability as a force of change in many industry markets and, as a result, its potential to become a key innovation engine to improve many aspects of human life. 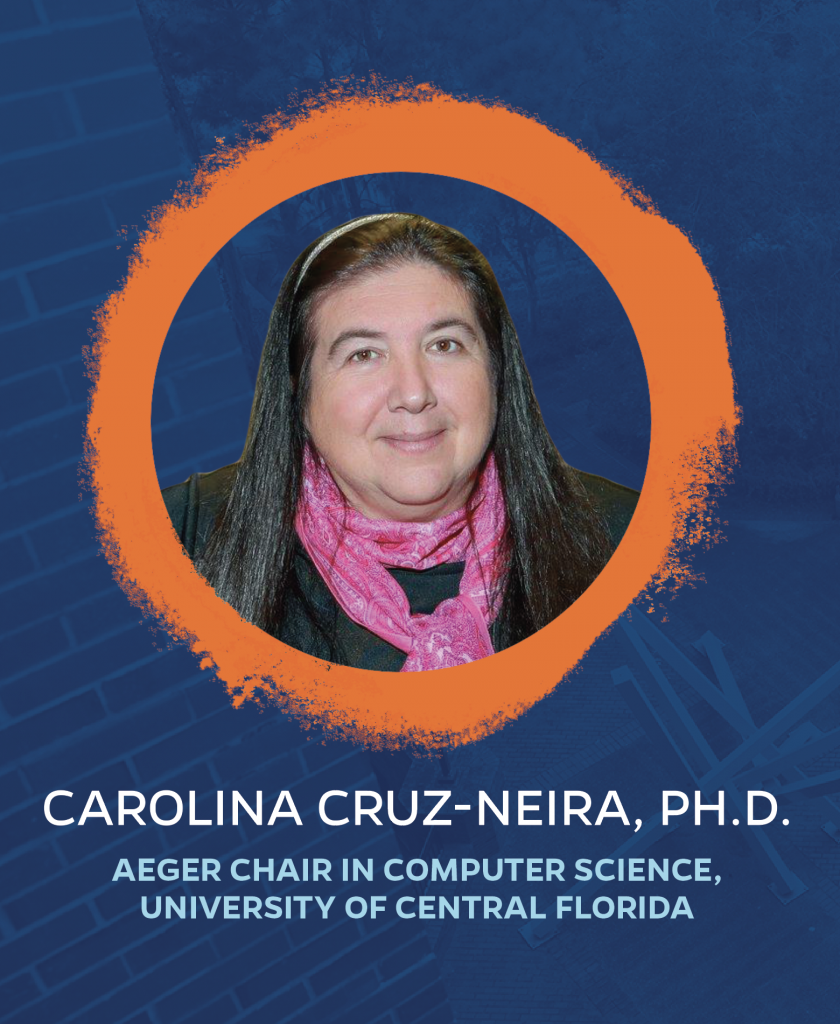 Biography: Dr. Carolina Cruz-Neira, a member of the National Academy of Engineering, is a pioneer in the areas of virtual reality and interactive visualization, having created and deployed a variety of technologies that have become standard tools in industry, government and academia.  She is known worldwide for being the creator of the CAVE virtual reality system. She has dedicated a part of her career to transfer research results into daily use by spearheading several Open Source initiatives to disseminate and grow VR technologies and by leading entrepreneurial initiatives to commercialize research results. She has over 100 publications as scientific articles, book chapters, magazine editorials and others. She has been awarded over $75 million in grants, contracts, and donations. She is also recognized for having founded and led very successful virtual reality research centers, like the Virtual Reality Applications Center at Iowa State University, the Louisiana Immersive Technologies Enterprise and the Emerging Analytics Center at the University of Arkansas at Little Rock.  She has been named one of the top innovators in virtual reality and one of the top three greatest women visionaries in virtual reality. BusinessWeek magazine identified her as a “rising research star” in the next generation of computer science pioneers; she has been inducted as a member of the National Academy of Engineering, an ACM Computer Pioneer, received the IEEE Virtual Reality Technical Achievement Award and the Distinguished Career Award from the International Digital Media & Arts Society among other national and international recognitions. She had given numerous keynote addresses and has been the guest of several governments to advise on how virtual reality technology can help to give industries a competitive edge leading to regional economic growth. She has appeared in numerous national and international TV shows and podcasts as an expert on her discipline and several documentaries have been produced about her life and career. Currently, Dr. Cruz is the Aeger Chair in Computer Science at the University of Central Florida.