Principles and Protocols for Transparent Counting Of Secret Ballots

Abstract: Elections in the United States must record, count, and aggregate the preferences indicated by the voters, (1) without subjecting voters to coercion or bribery (i.e., using a secret ballot); (2) with many different contests to vote on in the same election (making it impractical to count by hand); (3) administered by sometimes partisan election officials (thus requiring protocols that are sufficiently transparent for the losing candidate to trust the result); (4) using voting machines in which (like any modern computers) we’re not completely sure what software is installed; and (5) with voters who are only human and use the machines only once every two or four years (so human-factor issues are important). It’s difficult to satisfy all these requirements simultaneously; I will describe the consensus that has been reached in the U.S. about how to record and count votes, and the use of risk-limiting audits to detect and correct computer hacking and inaccuracies. 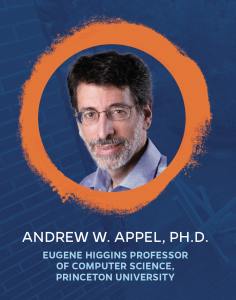 Biography: Andrew W. Appel is the Eugene Higgins Professor of Computer Science at Princeton University, where he has been on the faculty since 1986. He served as Department Chair from 2009-2015. His research is in software verification, computer security, programming languages and compilers, and technology policy. He received his A.B. summa cum laude in physics from Princeton in 1981, and his Ph.D. in computer science from Carnegie Mellon University in 1985. He has been Editor-in-Chief of ACM Transactions on Programming Languages and Systems and is a Fellow of the ACM (Association for Computing Machinery). He has worked on fast N-body algorithms (1980s), Standard ML of New Jersey (1990s), Foundational Proof-Carrying Code (2000s), and the Verified Software Toolchain (2010s). In 2018, he coauthored Securing the Vote: Protecting American Democracy, a consensus study report of the National Academies of Science, Engineering, and Medicine.