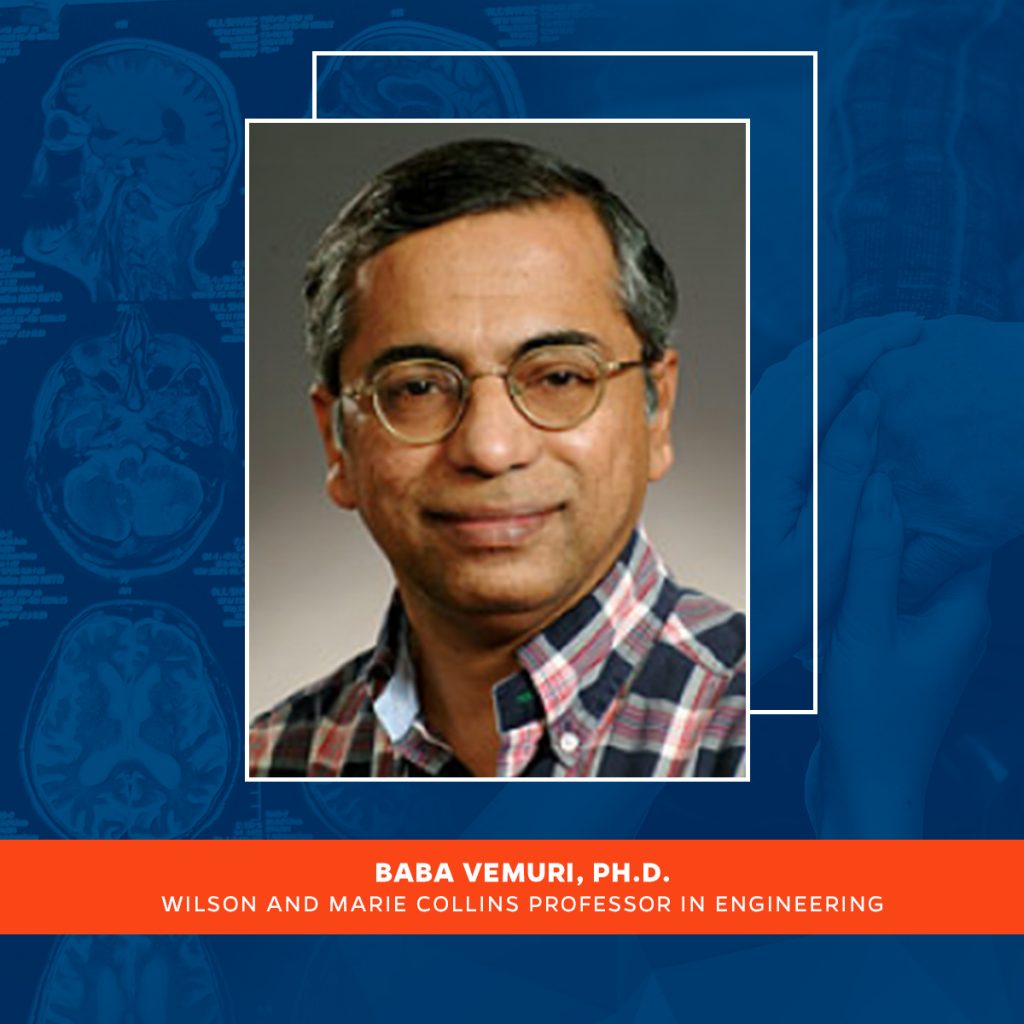 A four-year grant by the National Institutes of Health (NIH), National Institute of Neurological Disorders and Stroke (NINDS), and National Institute on Aging (NIA) has been awarded to Baba C. Vemuri, Ph.D., the Wilson and Marie Collins Professor in Engineering at the University of Florida (UF), to resolve the limitations of MRI for the purpose of differential diagnosis of neurodegenerative disorders, such as Dementia with Lewy body (DLB), Parkinson’s Disease and Alzheimer’s Disease, using sophisticated mathematical models in conjunction with high angular resolution diffusion MRI (HARDI).

“One of my primary research areas is the development of imaging biomarkers for Neuro-degenerative disorders. Within this group of brain diseases, distinguishing between DLB and Parkinson’s, and DLB and Alzheimer’s is a particularly challenging problem even for well-trained neurologists due to possible overlapping symptoms,” Dr. Vemuri said. “Diffusion MRI may mitigate this challenge by providing subtle distinguishing micro-structural changes caused by each of the diseases. However, computational methods to automatically identify and localize these microstructural changes are  scarce if any in the literature, thus motivating me and my collaborators to pursue this challenging research goal.”

Dr. Vemuri will work with co-investigators Melissa Armstrong, M.D., at the Department of Neurology; David Vaillancourt, Ph.D., the Department of Applied Physiology and Kinesiology; and Hani Doss, Ph.D., at the Department of Statistics, all at UF on the $1.39 million grant for the project, “Higher Order Convolutional Neural Networks for Classification of Lewy-body Diseases and Alzheimer’s Disease.” The team plans to develop a deep-learning framework that can capture subtle micro-architectural differences in the brain, facilitating automatic classification of Lewy-body diseases and Alzheimer’s disease from diffusion MRI acquired from patient brains.

Recently, convolutional neural nets (CNNs), learning algorithms most commonly applied to analyze visual imagery, have had great success in image classification tasks in computer vision and medical imaging. CNNs, however, cannot cope with HARDI data in its native form, which are samples of functions defined on non-Euclidean (curved) domains.

According to Dr. Vemuri, this motivated the researchers “to propose the development of a novel higher order CNN that is a parameter efficient and an interpretable geometric deep learning network possessing improved model capacity, which we call the VolterraNet.” The VolterraNet will be designed for such data with the goal of facilitating the classification of DLB, Parkinson’s Disease and Alzheimer’s Disease groups. Further, VolterraNet will automatically localize the regions in the brain that are significantly discriminatory to these patient groups.

“This work will help researchers in neurology to identify and localize the microstructural changes caused by DLB, Parkinson’s, and Alzheimer’s and the pairwise differences if any,” Dr. Vemuri said. “This, in turn, may assist the neurologist in developing an effective treatment plan down the road.”