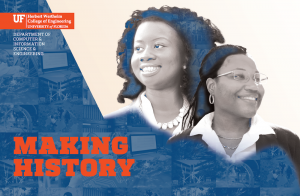 According to 2015 data from the American Society of Engineering Education (ASEE), the UF CISE department ranks No. 1 among computer science departments at public universities in the number of black students enrolled in the Ph.D. program.

The department employs five black women faculty. Of the 31 departments with black faculty members (out of a total of 191 departments surveyed in ASEE 2015 data), UF CISE employs twice the national average.

Based on 2016 enrollment data compiled by the department, there are 148 students enrolled in the UF CISE Ph.D. program. Nearly 11 percent of those students are black.

Several of our black Ph.D. students have been featured in the news. Colors of STEM featured Simone Smarr, Armisha Roberts, and Jasmine Bowers on its blog. Roberts and Bowers were also featured on The Grad Spark’s trailblazers blog, along with Jessica Jones, Imani Sherman and DeKita Moon