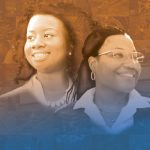 The University of Florida Department of Computer & Information Science & Engineering (CISE) celebrates Black History Month by spotlighting the achievements in diversity among faculty and students.

“Our diversity in CISE makes us all better. Our students, faculty, alumni and all members of the CISE family benefit from working with and interacting with people from all walks of life,” said Juan Gilbert, The Banks Family Preeminence Endowed Professor and department chair.

CISE is committed to increasing diversity in the department and the industry. In 2017, the department became a BRAID (Building, Recruiting and Inclusion for Diversity) Affiliate, an initiative that aims to increase diversity among undergraduate majors in computer science departments, with particular attention to women and racial/ethnic minorities.