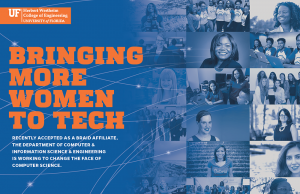 Supporting Women and the Industry

Recently accepted as a BRAID Affiliate, the UF Department of Computer & Information Science & Engineering is working to increase diversity in computer science

Diversity makes the industry stronger. That’s why UF CISE excels in the number of women throughout our program. Want to learn more about our diversity? Come see us at the Grace Hopper Celebration of Women in Computing in booth 1942 on Oct. 4-6, 2017.

According to 2016 data from the American Society of Engineering Education (ASEE), CISE ranks No. 1among computer science departments at public universities in the number of women faculty.

Based on 2017 enrollment data compiled by the department, out of 33 Ph.D. students enrolled in the Human-Centered Computing program, 72 percent are women.

Based on 2017 enrollment data, there are 141 students enrolled in the CISE Ph.D. program. Of the 97 departments with women enrolled (out of a total of 107 departments surveyed in ASEE 2016 data), UF CISE has 32 percent women enrolled, which is 1.5 times the national average.